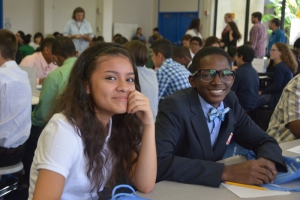 The Houston Chronicle recently reported on IPAA and PESA’s efforts to open doors to careers in science.

“PESA is committed to bringing students an innovative and fresh perspective into the world of energy and developing the next generation of talented energy professionals,” says PESA President Leslie Beyer.

Read more about PESA’s efforts in energy education in our latest newsletter (page 5).

Women have been under-represented in the field of science throughout the ages, especially in medicine and engineering.

In the 1970s and ’80s, female engineers began to dot the oil and gas industry’s landscape, and more female doctors were seen in hospitals. But they were few. Today, this is changing.

Both industries and other science-related fields are continuing to struggle to fill the huge number of jobs. Companies have become creative, recruiting overseas, other industries and looking at the female population for positions by collaborating with schools, supporting events, providing workshops, all to recruit young girls and boys into science.

The most promising answer to fill the shortage of labor in science-related industries has is supporting and/or opening schools focused on science.

“The Independent Petroleum Association of America (IPAA) Energy Education Center started with a simple idea to establish a program with public schools to make mathematics and science more meaningful and relevant and to address the projected loss of 50 percent of engineering and geosciences professionals due to an aging workforce,” said Barry Russell, IPAA president and CEO.

In 2012, IPAA announced a new partnership with the Petroleum Equipment & Services Association (PESA), a vigorous supporter of the academies, to continue to expand its commitment to education.

“Together with the support of the Petroleum Academy Education Advisory Board and critical corporate and individual sponsorships, the center is achieving an unprecedented level of success preparing the next generation, (both males and females) who will lead the oil and gas industry forward,” Russell said.

The center’s mission at the four established Petroleum Academies in Houston is to provide students with a multidisciplinary, advanced academic learning experience in science, mathematics and emerging technology they require to pursue professional training/degrees in engineering, geology, geophysics and global energy management.

One school, HISD’s Petroleum Academy at Young Women’s College Preparatory Academy, is a high school level, all-girls engineering/geoscience academy that will help change the demographics of the industry.

Read the article in its entirety at chron.com