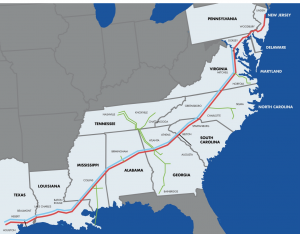 The Colonial Pipeline, the largest U.S. refined products pipeline, was the victim of a ransomware cyberattack last Saturday. A Russia-based cybercrime group called DarkSide admitted guilt for the attack, which has threatened fuel services to more than 50 million Americans. Spanning more than 5,500 miles, Colonial runs from Texas to New Jersey and supplies airports, military installations and retailers.

Colonial is not the first victim of DarkSide’s ransomware attacks. Since August 2020 the criminal gang attacked several companies in the U.S. and Europe using a similar tactic. Ransomware attacks attempt to extort their targets by hacking into systems and locking them, and then demanding monetary payment to return control, with the double threat of releasing private company information if the victims do not comply.

While the attack did not directly shut down the pipeline’s operations, Colonial chose to halt operations until the scope of the infiltration could be assessed.

The U.S. critical energy infrastructure network is under constant threat of attack from both state sponsored and rogue hackers attempting to disrupt the supply chain. As attacks become more sophisticated, companies are tasked with properly training their workforce to recognize and mitigate potential threats, while partnering with experts at the highest levels of government to provide guidance on potential unseen vulnerabilities.

Several states in the Southeast have already seen fuel shortages as supply has been slow to recover. Both federal and state governments acted to mitigate effects of the disruption.

The Department of Transportation issued a temporary hours of service exemption to extend driving hours to truck drivers transporting fuel to affected areas.

The Colonial Pipeline has begun restoring service, but the company does not expect to be fully operational until the end of this week.

The Biden Administration is weighing a “temporary and targeted” waiver of the Jones Act to help deal with fuel shortages on the East Coast during the shutdown of the Colonial Pipeline.