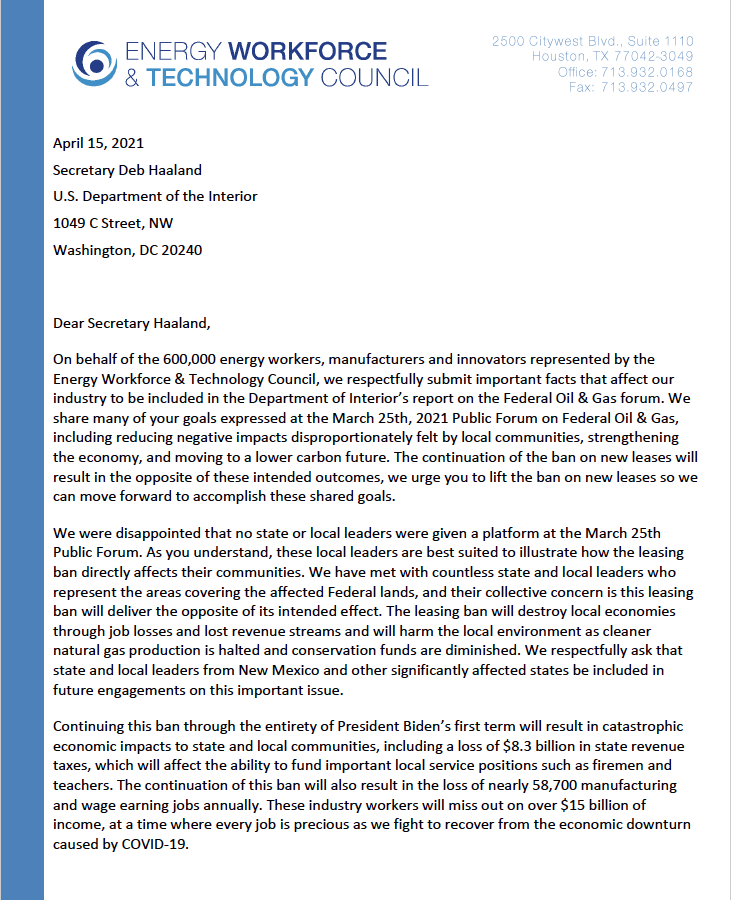 The Council submitted a letter to Interior Secretary Deb Haaland last week, as part of the Department of the Interior’s open call to provide information for a comprehensive review of the federal oil and gas program. DOI held a public forum on March 25 where Sec. Haaland delivered remarks addressing the Biden Administration’s moratorium on issuing new oil and gas leases on federal lands.  The forum featured panelists who represented a variety of stakeholders on the issue of federal lands leasing.

The Council’s letter encouraged Sec. Haaland to hear from state and local leaders in areas directly affected by the leasing moratorium, specifically the New Mexico delegation, which did not have any representation at the public forum. The letter went on to describe the economic impacts of a continued ban on new federal leases, with an estimated 57,000 job losses per year resulting in $15 billon in lost income in areas already suffering from the COVID-19 downturn.

The letter highlighted environmental impacts of the leasing ban, such as a potential increase in greenhouse gas emissions that could result from a continuation of the ban. More than 12% of U.S. natural gas is produced on federal lands. The shift from coal to natural gas for power generation has led the United States to dramatically decrease carbon emissions in recent decades.

With an estimated loss of $8.8 billion in conservation funds supplied through the Great American Outdoors Act and the Land and Water Conservation Fund, and $8.3 billion in state revenue due to the halt in federal leasing, the moratorium could have the opposite of its intended economic and environmental impacts.

Read the full text of the Council’s letter to Secretary Haaland. A recording of the March 25 public forum can be found here.