As the Trump Administration and Republican-led Congress begin to move forward with their ambitious overhaul of the entire federal tax code, the Fly-In provided an opportunity for PESA and attending member companies to convey the importance of implementing policies that ensure a secure supply of abundant, affordable and reliable energy for the American people.

Fly-In participants emphasized the important role that oil and natural gas plays in modern life, while also highlighting the service and supply sector’s commitment to innovation, safety and job creation in our diverse manufacturing and engineering workforce. Meetings were also held with lawmakers representing areas outside the oil patch, enforcing our message of the entire energy value chain.

The State Department hosted the Fly-In attendees for a policy briefing on several key issues – European energy security, sanctions and Venezuela. Following the briefing, Deputy Assistant Secretary John McCarrick from the Bureau of Energy and Natural Resources joined the group for a roundtable discussion. The group covered a variety of issues including LNG exports, Jones Act implications and Russian Sanctions.

Rep. Don Young (R-AK), who has represented Alaska for more than four decades, joined the PESA delegation for lunch. Rep. Young praised the oilfield service sector for the technology and innovations that broke the U.S. dependence on OPEC. He encouraged participants to continue to advance the strong safety culture that is a hallmark of the oil and gas industry.

On Wednesday afternoon, the 12 Fly-In attendees divided into three groups to meet with Congressional offices. Small group structure provided each attendee the opportunity to discuss detailed contributions to job creation and innovation as well as potential negative impacts and unintended consequences that regulations may have on his or her own business. Attendees visited several Congressional offices including Sen. Bill Cassidy (R-LA), Rep. Bob Latta (R-OH), Rep. Lynn Jenkins (R-KS) and Rep. Garret Graves (R-LA).

Wednesday evening closed with a reception and dinner in the Capitol Building, where Congressional and Committee staff and industry representatives networked and discussed policy priorities for 2017 and beyond. Sen. James Lankford (R-OK) joined the Fly-In participants for dinner. While policy issues surfaced during the dinner, most of the the evening was spent sharing personal stories and getting to know one another. After dinner, the Senator took the delegation for a private tour of the Senate chamber.

Over breakfast on Thursday, Sarah Ladislaw from the Center for Strategic and International Studies discussed the current geopolitical energy landscape and the outlook for the industry during the Trump Administration.

Fly-In participants spent the rest of the morning at the Department of the Interior. Director Scott Angelle from the Bureau of Safety and Environmental Enforcement (BSEE) shared his perspective on key regulatory issues his agency has under review. He strongly advocated for PESA member companies to encourage their employees to share their views on the importance of the oil and gas industry in local and state venues. They can play an important role in highlighting the value of the oil and gas industry to their local communities and external stakeholders.

The PESA delegation also had the opportunity to engage with Deputy Assistant Secretary for Land & Mineral Management Kate MacGregor and Deputy Assistant Security Casey Hammond. Deputy Assistant Secretary MacGregor provided an update on regulatory initiatives including hydraulic fracturing on federal lands, venting and flaring and regulatory reform. PESA members advocated support for increased access to onshore and offshore resources. Given the long-term outlook for increased energy demand, the U.S will need to make the best possible use of all its resources to ensure energy security and economic growth in an environmentally responsible manner.

The program concluded with a briefing by Sen. John Kennedy (R-LA). While the Senator was disappointed with the lack of progress in reforming healthcare, he is cautiously optimistic about the outlook for overhauling the federal tax code. He noted the overall goal of lowering rates for every business and household in America.

PESA has already begun plans for its February 2018 Fly-In, and we hope you will join us in elevating the profile of the oilfield service sector in Washington, D.C. Since many companies are currently in the 2018 planning cycle, we encourage you to include the 2018 Fly-In in your budget. If you have any questions or would like to discuss the Fly-In, please contact PESA Senior Director Public Policy Jean Gould or call 713-933-1920. 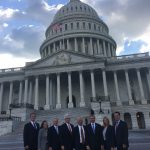 Members at the U.S. Capitol 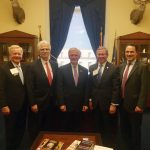 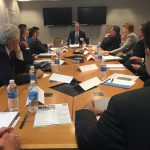 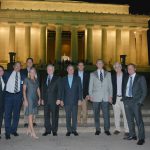 Members at the Lincoln Memorial 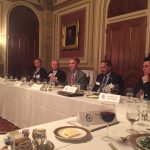 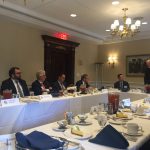 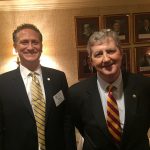 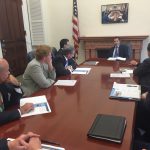