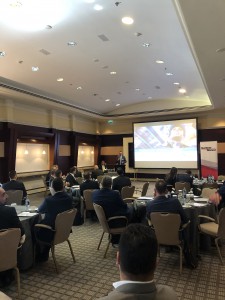 Concurrent with ADIPEC 2019, PESA held its annual Middle East Chapter meeting, sponsored by Gardner Denver, on November 12. The half-day meeting presented an opportunity for members to discuss the chapter’s activities and hear from experts on relevant topics going into 2020.

Wayne Holbrook, Director Global Development Project and Energy Services, Expeditors, gave forward-looking analysis of the international supply chain with his presentation “Global Logistics Market Update and IMO 2020.” Holbrook explained that the International Maritime Organization has ruled that beginning January 1, 2020, the marine sector must reduce the levels of sulphur emissions from 3.5% to less than 0.5%. He said many companies are not aware that the costs of shipping will be increasing by using fuels that have more distillates. The IMO changes present different impacts throughout the various stakeholders and Holbrook pressed attendees to look at the issue now before running into surprises within the supply chain.

Rachel Duran, Commercial Attaché for the U.S. Embassy in the UAE, gave a series of commercial updates to attendees. She noted that Ambassador John Rakolta Jr. was recently appointed to the Embassy and is very interested in advocating for U.S. businesses in the region. Duran reviewed advocacy programs and Gold Key Services that American businesses can access through the Department of Commerce and how her office can assist those in the region.

To give context to Abu Dhabi National Oil Company’s (ADNOC) In-Country Value (ICV) program, Dr. Constantin Frank-Fahle, Legal Consultant, SCHLUTER GRAF Legal Consultants, gave attendees key facts, lessons learned and an outlook. He spoke about how the Combined ICV Score factors both the certification process and the ICV Improvement Plan that contractors legally need to comply with. Fahle also noted that the highest ICV score does not guarantee the bid, as commercial evaluation of the supplier is also a major factor.

Building on that conversation, Dr. Tom Deeb, Vice President, T&M Associates, spoke about localization programs in the UAE. He focused on the keys to succeed; how are companies are using value-added programs as a competitive advantage to dominate the market. He encouraged attendees and their companies to be creative and to distinguish themselves through communication. Deeb concluded that companies need to decide their strategy and most importantly, that buyers want the ‘best value.’

Abu Dhabi’s Onshore Block 3 was awarded to Occidental in February 2019. It is part of ADNOC’s “smart growth strategy to extract maximum value” in its development of the Shah Gas Field. Campbell opened by stating that the first well will be drilled in December with the hopes of expediting the production by leveraging existing nearby facilities and infrastructure. Rathnavel expanded on the goal of expediting production by stating that their research teams also want to study the reservoir data for future developments.

Overall, Oxy remains focused on “quickly constructed, cost-effective solutions that bridge the gap between discovery, appraisal, production and accelerate field development.” The target for the first well to be in production is by the end of second quarter 2020.

The meeting concluded with an announcement regarding a change in chair leadership for the PESA Middle East Chapter: Dennis Jol, Vice President, International, DistributionNOW, to Ed Whitnell, Vice President, Operations and Managing Director, NOV Rig Technologies, who will serve a three-year term. PESA thanked Dennis Jol for his leadership in building the chapter, and was presented with an appreciation award.